Within Color Management there are controls to adjust the three axes of each of the six primary (HSL). Not only are there hue and saturation adjustments, but there’s even the gain adjustment, something I’ve only found in models that are much more expensive. And, in fact, not even in all of them. Another small token of how serious BenQ’s bet is. Interestingly, I was surprised that not all the handles are in the middle of the default settings. It seems as if the engineers wanted to calibrate it and leave it at the values they needed to get the best color fidelity. 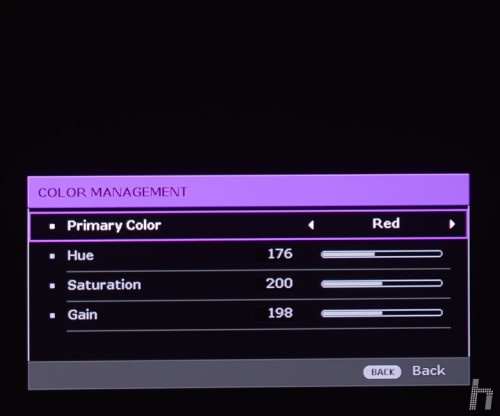 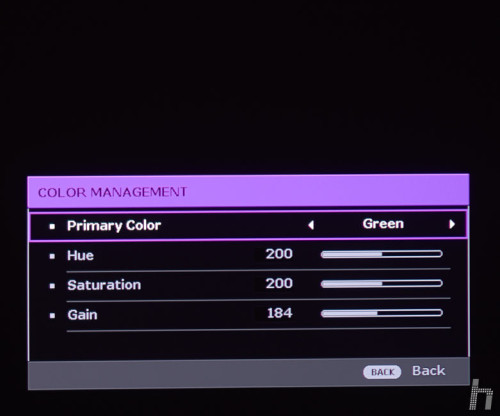 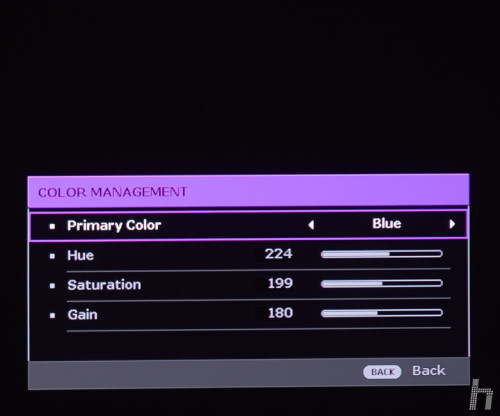 Cinema Master is a set of settings that apply various processing to the image. For example, Color enhancer, according to the manual, allows to increase the saturation finely thanks to complex algorithms. I don’t doubt it, but personally I prefer to leave it well calibrated and that the colors are as they should be. 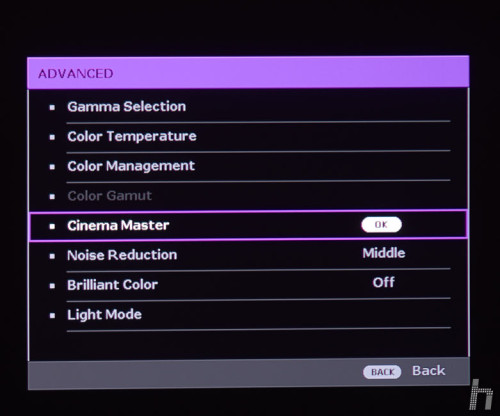 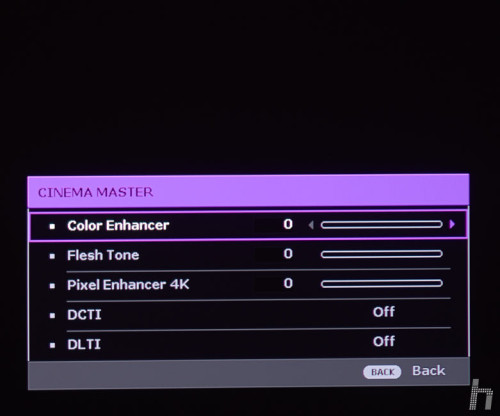 Flesh tone serves to slightly modify the skin tone to bring it to the ideal tone, and avoid colorations that are seen under light sources with dominant.

Pixel enhancer 4K is an advanced sharpness filter, ideal for 4K. The effect is noticeable (only with 4K though) and usually 2-3 works perfect for many cases. DCTI and DLTI are processed to increase saturation and brightness with colored or contrasted images.

Noise reduction reduces the noise produced by sources that are not of the highest quality (DVD players, media players…). 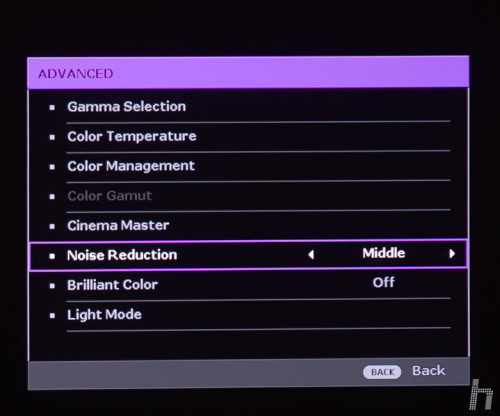 Brilliant color increases the brightness of the white for more contrast, but at the expense of losing the white point calibration. Useful with TV programs but for a purist film buff it’s best to leave it off.

And with the Light mode comes an important setting: the brightness level of the bulb. Three modes are available: Normal, Eco and SmartEco. 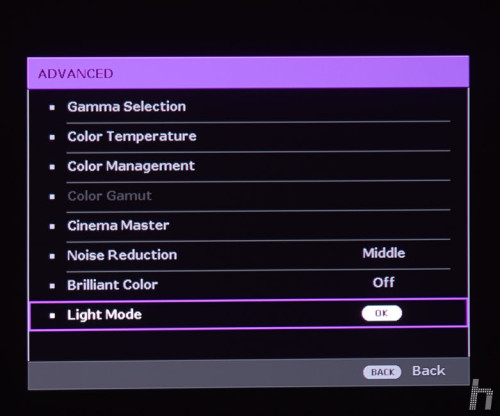 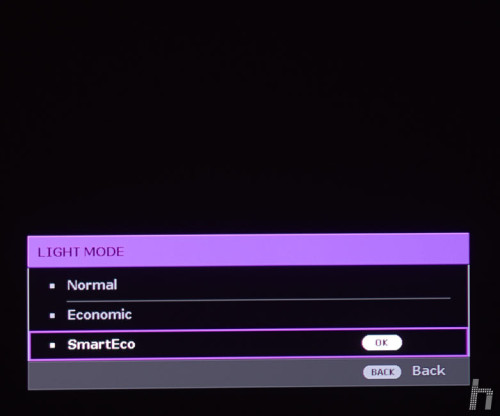 With Normal, the light bulb operates at full power, the brightness of the image is at its maximum and is therefore as good as it looks in rooms with ambient light, not too dark. That if: the wear of the bulb is greater, and the life expectancy is 4,000 hours.

In Economic the bulb lowers the intensity and lowers the brightness of the image, as well as the fan. As it works at lower power, it heats up less, and the fan is quieter. In addition, life expectancy is considerably extended to 10,000 hours.

The SmartEco is very interesting, which varies the power of the bulb on the fly, depending on the image itself. If it is dark it automatically lowers the brightness, if it is bright it increases it. It’s a smart choice that looks great. In my case, having always used it almost always in complete darkness, I preferred the Economic, which also provides optimal brightness in these conditions, even with such a large image of 170″ (3.8 m wide, which is no small thing).

Also in the next menu we find Overscan settings. We also find the settings for 3D video and HDR. 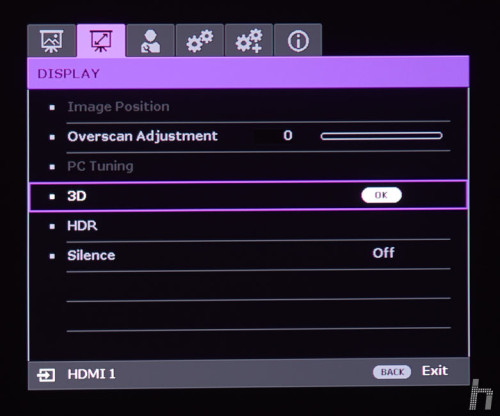 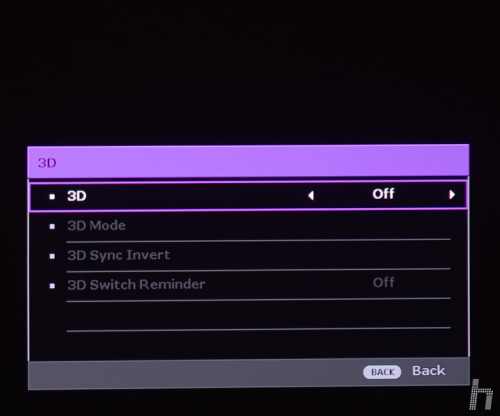 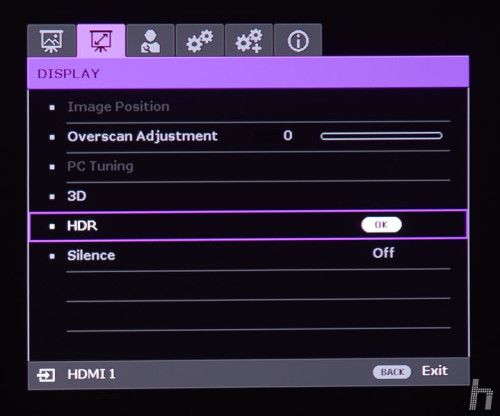 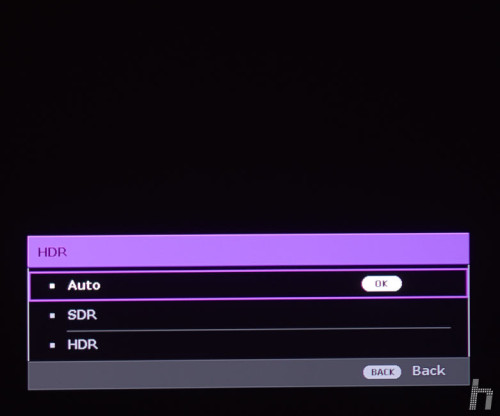 So far I haven’t been able to test 3D, although some people say that it’s beginning to look like a passing fad that’s gone through the ‘boom’, and the proof is that less 3D content is being edited. To try it out you need the optional glasses, which are not included, and of course a compatible player. I have been told not to test the 3D yet because a new firmware was on its way and improves performance, so I am looking forward to having it updated once it is shipped back to the factory. I will post more information as soon as I receive it back with the new firmware.

The HDR function controls the behavior of the projector with such content. Basically you can force the projector to assume that the signal is HDR or non-HDR, or to automatically detect it. There is no reference to what kind of HDR signal it will assume, so I imagine it will correspond to one of the standards, the one the brand has chosen. Currently we have several: HDR10, HLG, Dolby Vision…

There is no information of which standard BenQ uses, although I assume it recognizes several. In a next addition I will comment on the projector’s performance in both HDR and 3D.

In the Installation menu you will find the typical settings to configure how the projector is installed: upwards or downwards, front or rear of the screen, as well as to force the aspect ratio or the high altitude mode (which increases the fan speed to ensure good cooling in very high places, because of the lower air density). 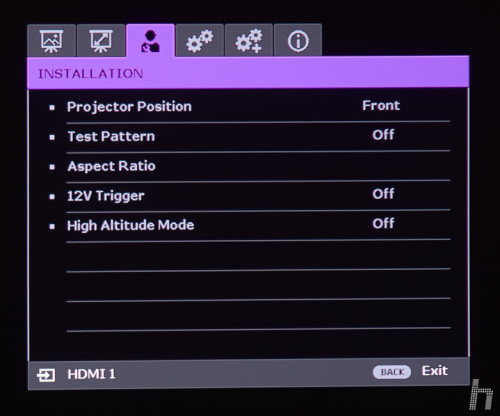 In System Setup Basic we also find typical settings, such as the background color when there is no signal, the time for automatic shutdown without signal or the source search. The sound menu is worth noting, because the W1700 has a speaker that – though small – sounds really good. Not that it is a substitute for a good HIFI system, of course, but the truth is that to watch the news or simply listen to the voice, it works perfectly. In fact, my kids haven’t had any trouble watching a cartoon movie like this, and they’ve had a great time. With the high volume it offers a more than good level of listening. 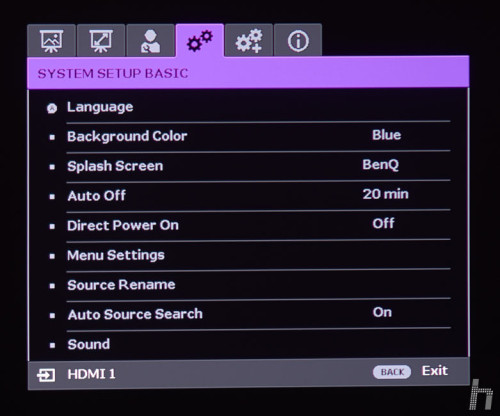 Within the Sound Mode you can choose from several equalizations: cinema, music, games, sports and user. In the latter you can adjust the EQ manually in 5 bands (good!). 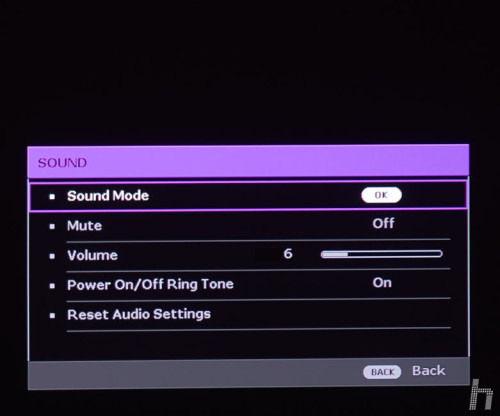